Majops
Organized Pipeline Scripting
in Single Pipelines
Maybe, you think: "Oh, I want to build my own single pipeline to analyze and explore my data. I program some scripts. I connect them together to call them after one another and it works." That sounds easy, but that is not the truth unfortunately. When you decide to build a single pipeline according to Majops, you have to follow some rules. You will have to program your single pipeline very organized.
Here, you read the rules how you have to be build a single pipeline very organized according to Majops.
Bash is the highway of a single pipeline:
First of all, what is very important, is that scripts and programs of your single pipeline always have to be called from the programming language Bash. All programs and scripts are called from the Linux environment. The programming language for Linux is Bash. If you would call from a different environment, that would be insufficient. For example, If you would call your scripts and programs from Python, what actually happens, is that the Python environment is left and the environment changes to Bash. After that, the script or program is called and the environment changes back to the original environment of Python. This happens each time with every call. Because this is carried out many times, this slows down your single pipeline as you can imagine.
To prevent these problems, you always have to use a so-called highway bash script as starting point. This highway bash script can be downloaded on the page of Majops Skeleton Script Downloads in Single Pipelines.
Below in figure 5, you can see how this highway bash script actually works schematically. 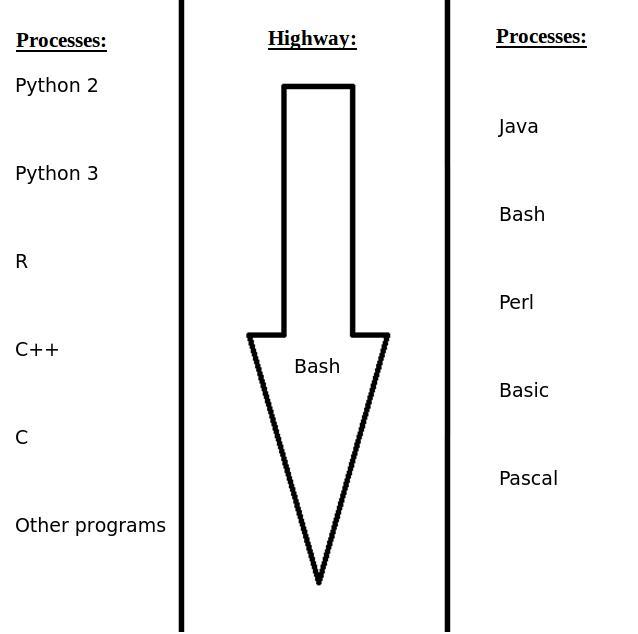