Majops
General Information about Pipelines
Case scenario:
In the supermarkets, you would like to buy plastic bottles of water. The plastic bottles have to be produced first. The way how that they are produced, is shown in figure 1 below. In figure 1, you can see oil on the left and plastic bottles on the right.

All these processes have to be put after one another. Then, you get a simple pipeline for making those plastic bottles out of the oil.

So, a pipeline is used to make plastic bottles out of that oil in this case scenario above. The making of these bottles will happen in phases/processes. Each phase/process has its own task.

A pipeline can be compared to pipes that are connected after each other. 2 pictures in figure 2 below show what is meant.
On the left, you see pipes. Each pipe represents a specific task that is supposed to accomplish. The output of one pipe will be input for the next one. Etcetera. The only problem is that each pipe is separate. The solution for that problem is to connect all those pipes together after one another. The end result is one long pipeline. That is shown in the picture on the right in figure 2.
Figure 2: Building of a pipeline from separate pipes.
The picture of the pipeline in figure 2 is of course only a representation. In software engineering, each pipe is a process and all processes are connected to each other in a pipeline.

The definition for a pipeline is as follows:

A chain of processing elements, arranged so that the output of each element is the input of the next element.

A simple pipeline is shown figure 3. 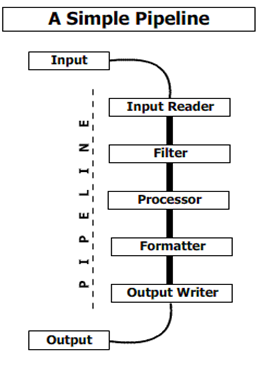 Figure 3: A simple pipeline.
This simple pipeline consists of 5 processes. Each process has its own specific task. The name of each process shows what the function of that process is. Furthermore, the output of each process will be the input for the next process.
In this pipeline example, the process 'Input Reader' get its input from the start, but its output will be transported to the process 'Filter' as input. As process 'Filter' has filtered the data, its output will be processed in the process 'Processor'. Etcetera. Finally, all the data is going through the processes 'Formatter' and 'Output Writer'. The process 'Output Writer' will finalize the pipeline to save all the output data.